It wasn’t what you’d expect a typical office setting to look like. 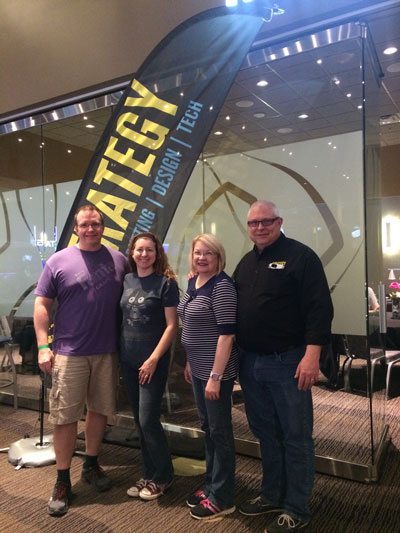 There weren’t a lot of phones, computers, or space. In fact, there was barely a window.

It was an unfinished half-basement and it was the first place Strategy called home.

In the beginning, there were only four employees – the founders of the company:  Jason and Valorie Wilson & Ed and Karmalene Roche.

Driven by a shared vision for the company, the founders wanted to create an atmosphere that not only they would value and enjoy, but their employees and clients would too.

“Strategy began with a lot of hope, prayers, hard work, and determination,” says Karmalene. “In our vision, we saw a company that would care for its staff and families, sharing life, and celebrating along the way.”

In 2011, the company hired more employees, including web developers and a graphic designer. At the time, Strategy had 48 clients and generated $86,000 in revenue.

And over the years, the numbers kept growing.

In 2014, Strategy moved into part of a suite office at 16500 Indian Creek Parkway – less than 10 minutes from where it first started.

6 months later, the company expanded to a neighboring suite.

“It’s a little miraculous and very humbling,” says Valorie. “We began with a strong foundation and have organically grown over the past years. We’ve connected with a lot of great people and continue to gain momentum.”

Speaking of momentum, this year the company will undergo its third expansion to accommodate the growing staff.

“As we move into our third expansion, we hope to continue to provide resources for the causes we care about: the individuals and families connected to Strategy, the clients we serve, and the special causes that feed, cure, and otherwise lift up those who need our help.” says Ed.

In the past 6 years, Strategy has continued to increase revenue, finishing 2016 at $1,001,000. Currently, Strategy serves 260 clients, ranging from coast to coast, as well as internationally.

“One of the greatest highlights has been assembling and working with our team. I am constantly amazed at their passion and creativity and how they care for our clients,” says Jason. “It’s been a blessing to be a part of this adventure and I look forward to the future as we continue to create one of the best marketing & technology agencies in Kansas City!”

Tired of your marketing not working? Try Strategy